Hank's *A Restaurant, Victoria BC 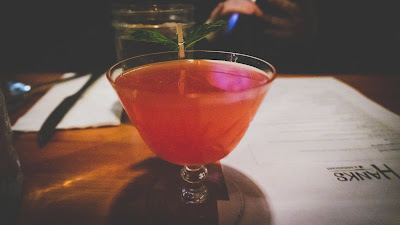 We had to use Google maps to find this place, and we were almost on top of the location when we noticed it. Hanks is a small (allegedly eighteen seats, but even that’s pretty tight) restaurant with a small sign and darkened windows. Hanks is hidden in plain sight right downtown Victoria on Douglas street. 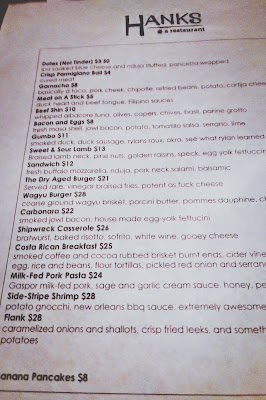 When we walked in I was instantly delighted, I felt like I had discovered a private back room of an obscure watering hole. The thick aroma of deeply browned meat hit my nostrils immediately. The place looked completely full; that is to say there were a dozen or so patrons, mostly sitting on stools around the bar.  We inquired if it possible get seated, but I was thinking we would be turned away. Whiskey and I may have fit slotted in somewhere, but we were expecting a guest to join us as well.  The bubbly hostess/server told us they had one table near the back of the dining room, so she led us eleven steps towards the back where we were delighted see the largest table (of the three tables) was free.  The back of the room was very dim the table was surrounded by walls on three sides. As we sat down I noticed the artwork on the walls was made up exclusively of Pearl Jam posters.

My eyes shot back and forth between the food menu and the cocktail list, both incredibly intriguing.  I started with a Bloody Margaret, described as Mescal, blood orange, candied Serrano pepper syrup mint and lime. It was like no other drink I’ve had: smokey, yet clean and bright with lingering spice on my lips. Other drinks on the menu had descriptions equally if not more provocative.

The edible portion of the menu had selections of many proteins including jowl bacon, pork neck, Wagyu beef, side-stripe shrimp and others. Also inexplicably, at the very bottom of the menu: banana pancakes.  We started with “Beef Shin” a concoction of thinly sliced meat and whipped albacore, and “Meat on a stick”: Duck heart and beef tongue, satay style. The meat was good, although the peanut flavours seemed a bit out of place.

I ordered up another cocktail dubbed Devil’s Blood (Mescal, sherry, cherry and hate) and we ordered a second small course of food. Curious about the Gumbo (a good gumbo is a rare thing in this part of the world) made with duck, I ordered that.  Whiskey enthusiastically asked for fettuccine made with lamb neck in a sweet and sour sauce with raisins and pine nuts.  I tasted that when it arrived, it was very good, unexpectedly sweet, a playful dish.  The gumbo was dark as could be, a sign of a proper black roux. The flavours were complex, deep, earthy and comforting. The okra was even good, not overly slimy nor stringy, it was intensely satisfying.

Soaking up the atmosphere, we didn’t want to leave so I ordered another drink. This one without Mescal, but instead dark rum and lime with a “10 pound uppercut of ginger”. I like ginger. I like ginger in copious quantities. This was totally my bag. I had more than one.

9/10
(Some of the flavours were not quite to my palette, but I would have loved to have tried each and every item. I loved the experience in a way like no other place I’ve dined.)

I loved the dark and the dim! This is not the place to go if you are hoping for stellar food photos or if you don’t really really like 90s grunge music, but, if you are looking for a tiny restaurant with food that will surprise and delight you and you are not afraid of a few odd ducks (literally) on the menu. You want to eat here.

We were escorted to a tiny, almost hidden table for four at the back, and were immediately welcomed with drink menus and the honesty of a server who didn't drink but was happy to introduce us to the staff member that did and could make some recommendations.

The first thing to catch the eye on the menu was the simplicity of it.  Dishes titled things like “Meat on a Stick“ and drinks that claimed to be filled with various exotic ingredients and “hate”.

I was in love with the playful and unassuming nature of Hanks.

We had the Meat stick, duck heart and beef tongue on a skewer and a plate of beef shin (thin sliced beef with tuna olives, capers, basil all whipped).  It was a pretty stellar combination. My only complaint being that I feel the dish would have been better served very rare or even raw.  I felt the beef shin was perhaps overdone but I am guessing as Hanks used to be a BBQ place that it was purposeful.

Next up was sweet and sour lamb and D had Gumbo.

Did I mention that Hanks used to be just BBQ? The lamb was some of the best slow cooked, drop off the plate, melt in your mouth, and take you to heaven lamb that I have EVER had. You could have put it through a straw it was so tender. I am not a connoisseur of gumbo but D swore it was some of the best he had eaten.

I really loved Hanks and its dark little corners, the music that took me back to my teen years and the drinks that seemed to be created with a lot of love and more than a little bit of mischief.  I left feeling like something  really cool had just happened. That I had just been to a place that really wasn’t much like any other.

I would go back. 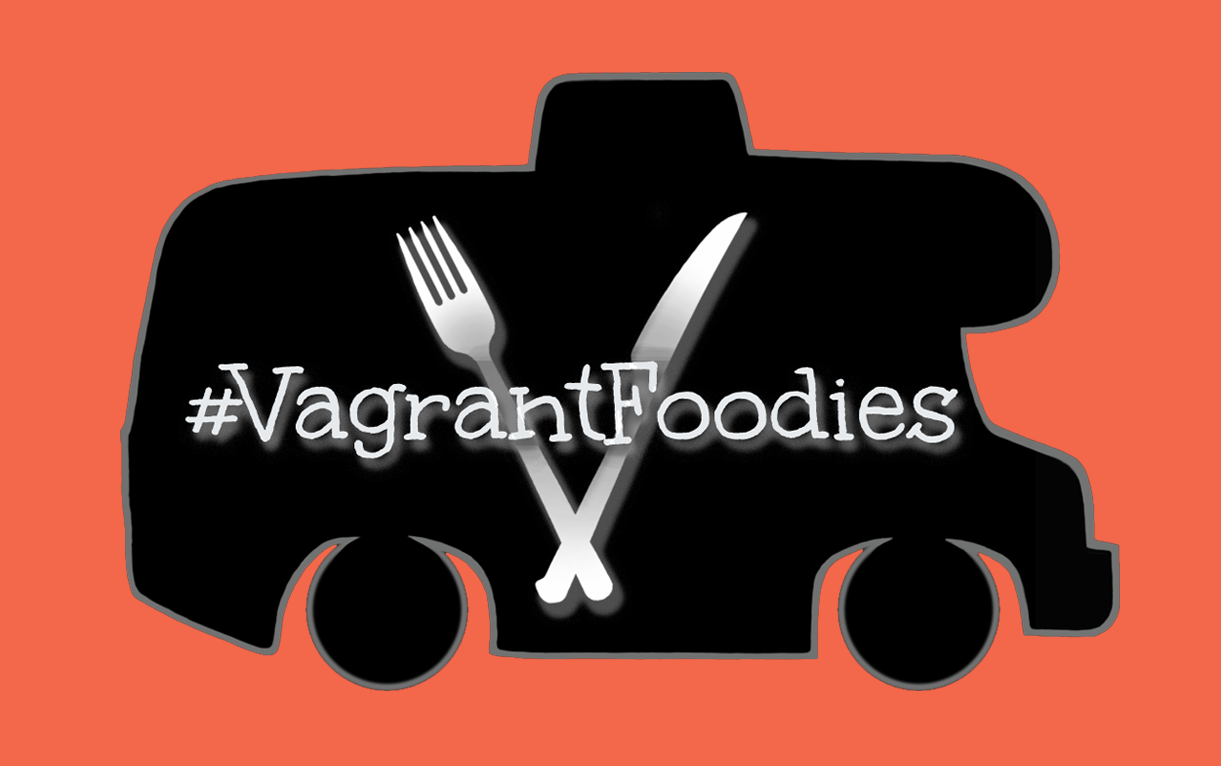